The radio systems created today and the scenarios for their operation are too complex to, as before, test them by measuring a dozen parameters. Developers need extensive functional testing, from the first search experiments to testing samples of radio modules and finished products. The scale and scope of such tests is unaffordable without a combination of computer modeling and automated measurements - special flexible experimental stands are needed.

Radio channel emulators allow you to carry out complex experiments in the mode of software and hardware modeling (PAM) of the interaction of radio systems, - in real time and with real signals. Real radio devices are connected to the Emulator, which simulates the environment, the propagation of signals in it, as well as other devices and signals.

Hardware and software modeling combines the advantages of real experiments with the availability and flexibility of software simulation. The key parts of the system interact through physical signals, and their logic, as well as the behavior of other parts, is modeled in powerful computers.

The basic idea is to replace the real radio air with a bundle of SDR transceivers that receive signals from real (tested) transmitters, calculate and emit response signals for receivers, taking into account the propagation of radio signals under simulated conditions. With the proper performance of the system, the full effect of the real operation of devices on the air is ensured. 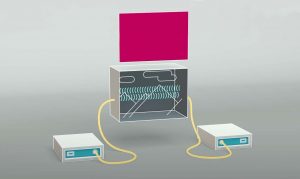 The basic idea of ​​a radio channel emulator:

Radio devices exchange signals through a

"box" in which signals are generated in

accordance with models and scenarios

The emulator is designed to work with real devices and can include separate SDRs to simulate missing or experimental devices. 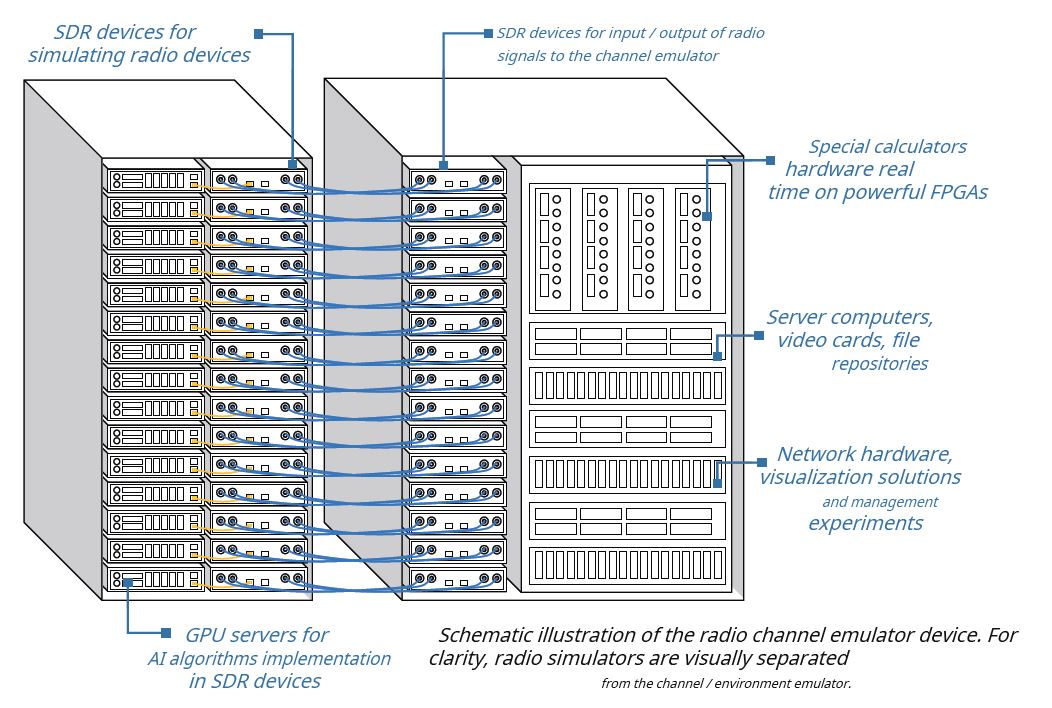 hardware performance is required for real-time DSP of the physical layer of devices, including MIMO and OFDM, and for modeling the radio environment in super-computers from Xilinx FPGA clusters.

support up to 1024 channels is possible thanks to tight synchronization of SDR transceivers, FPGA signal processing and application software based on the LabVIEW MIMO Application Framework.

AI solutions, including neural networks and deep learning, are evolving rapidly. Emulator systems are built on the latest IT solutions to support new algorithms.

For model computing, the Emulator relies on standard IT servers and advanced graphics processing systems from NVIDIA. This makes it possible to simulate even very complex scenarios on a giant scale.

In the radio channel emulators, the capabilities of the NI MIMO Prototyping System software and hardware solution are available, designed for prototyping Massive MIMO and developing the necessary digital signal processing.

"The NI MIMO Prototyping System Integrated HW  Platform with  MIMO Application Framework took a lot of the complexity out of this development." 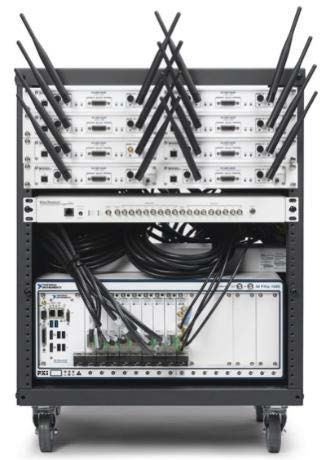 Supported MIMO configurations from 8 to 128 antennas at the base station, up to 8 MIMO antennas per UE, or up to 22 SISO UEs simultaneously.

The stand can also be used to perform student laboratory work in a number of courses on mobile communication systems. 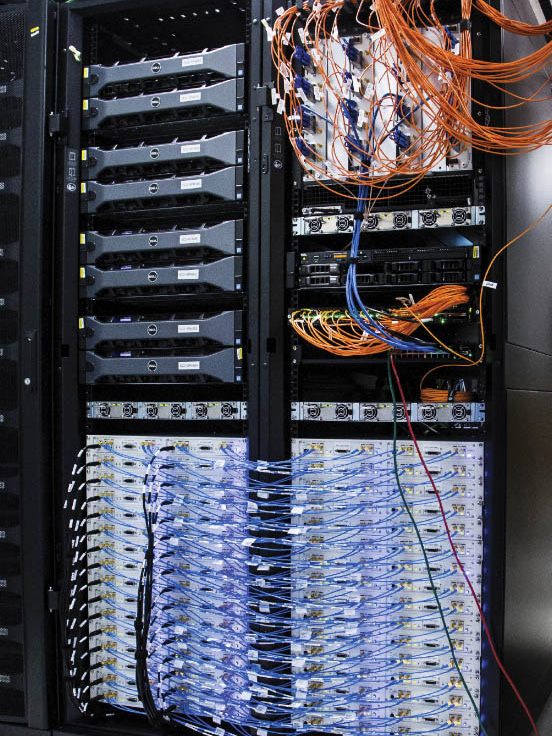 The channel emulator for software and hardware modeling of a variety of radio devices - the microwave supercomputer - is based on broadband SDR devices combined into a single system with an open FPGA for built-in processing of radio signals. If necessary, MAC and higher levels are implemented in multi-core CPUs. For the calculations of complex 3D scenarios, powerful video cards are used, which allows you to generate the necessary parameters on the fly and do without the preparation of large amounts of IQ data and post-processing. To calculate the interaction of radio signals in real time, clusters of powerful FPGAs based on Xilinx Virtex, interconnected by multi-gigabit lines, are used. Server controllers and fiber optic network ensure minimal delays between computers and transceiver modules. This design provides full-size real-time emulation of simulated and connected devices. At the same time, the modularity and compactness of the emulator is preserved within the standard 19 ”racks.

The Colosseum radio channel emulator for the DARPA Spectrum Collaboration Challenge project supports 512 channels in a Full Mesh topology to emulate the interaction of hundreds of SDR transceivers in real time. 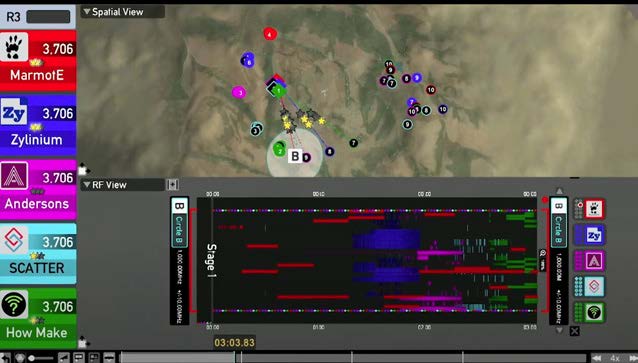 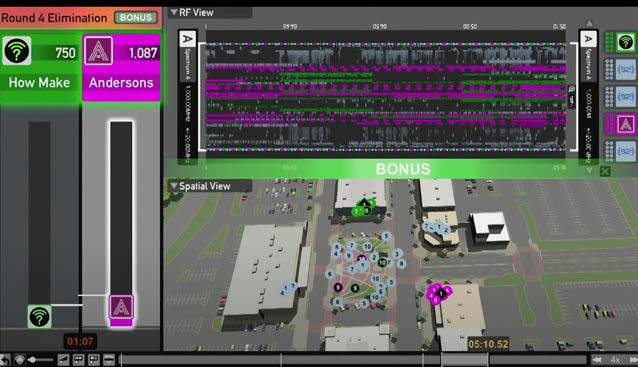 “Previously, for a repeatable experiment on a network, all of the network equipment had to be assembled and plugged together in a lab — prohibitively expensive if you needed more than a couple of devices. With the Colosseum, large-scale tests can be carried out in a completely repeatable manner. This is a real activator for this kind of research. ”

The composition and technical characteristics of the Emulator significantly depend on the specific configuration formed according to the technical requirements. For example, support for Mesh interaction requires special calculators of the "Microwave Supercomputer" option, and support for Massive MIMO requires the use of special blocks for synchronizing radio channels.

The specifications shown are generic typical values ​​and are for general information purposes only. To clarify the capabilities and obtain detailed characteristics of the system, discuss the requirements of your task with a specialist of MIR LLC. 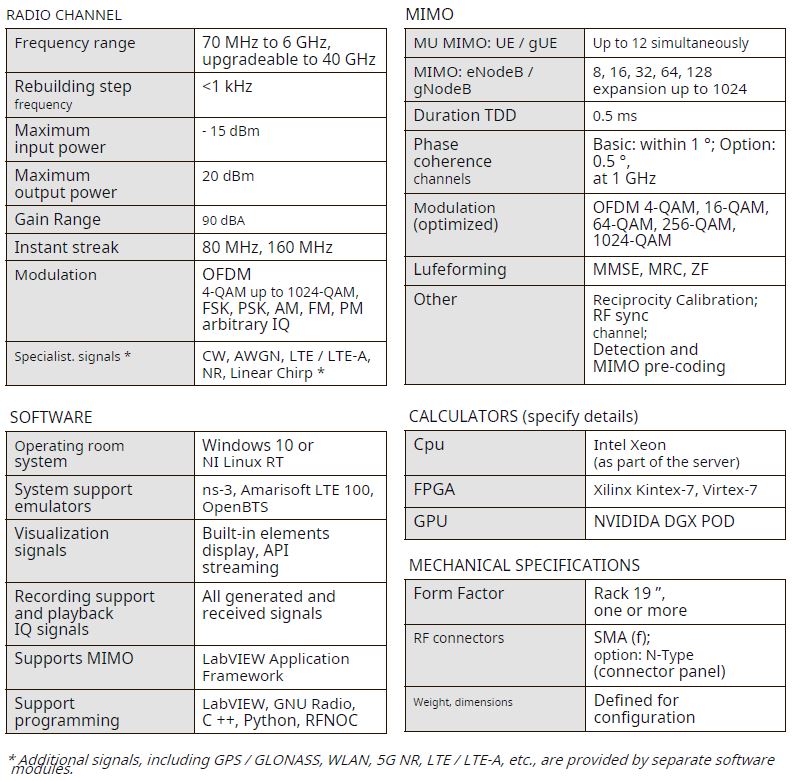 A radio channel emulator is an effective tool in conducting practical research and testing of radio devices, from the first search experiments to testing finished devices.

LLC "Modular Measuring Solutions" and YEA Engineering integrate and supply emulators of radio channels of varying complexity based on their own developments and products from National Instruments, Ettus Research, NVIDIA, Dell, Cisco, STC "Module" and others.

We provide technical advice on the modification of systems and create systems according to the terms of reference based on domestic technologies for special tasks, our own developments.

Requirements for the number of channels, computing power, system topology are discussed individually in accordance with the tasks of the stand.